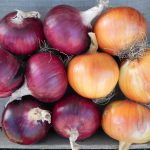 Fun Fact: Onions were highly regarded by the Egyptians. Not only did they use them as currency to pay workers who built pyramids, but they also placed them in the tombs of kings, such as Tutankhamen, so that they could carry these gifts bestowed with spiritual significance with them to the afterlife.